My dear friend Yaak and I undertook a 43-mile pilgrimage to Machu Picchu called the Salkantay Trek (salkantay = “savage mountain” in Quechua). Confident in our wilderness skills and eager for solitude, we embarked without guides or a group—just us, herds of alpaca, and possibility as vast as the mountainous landscape ahead. 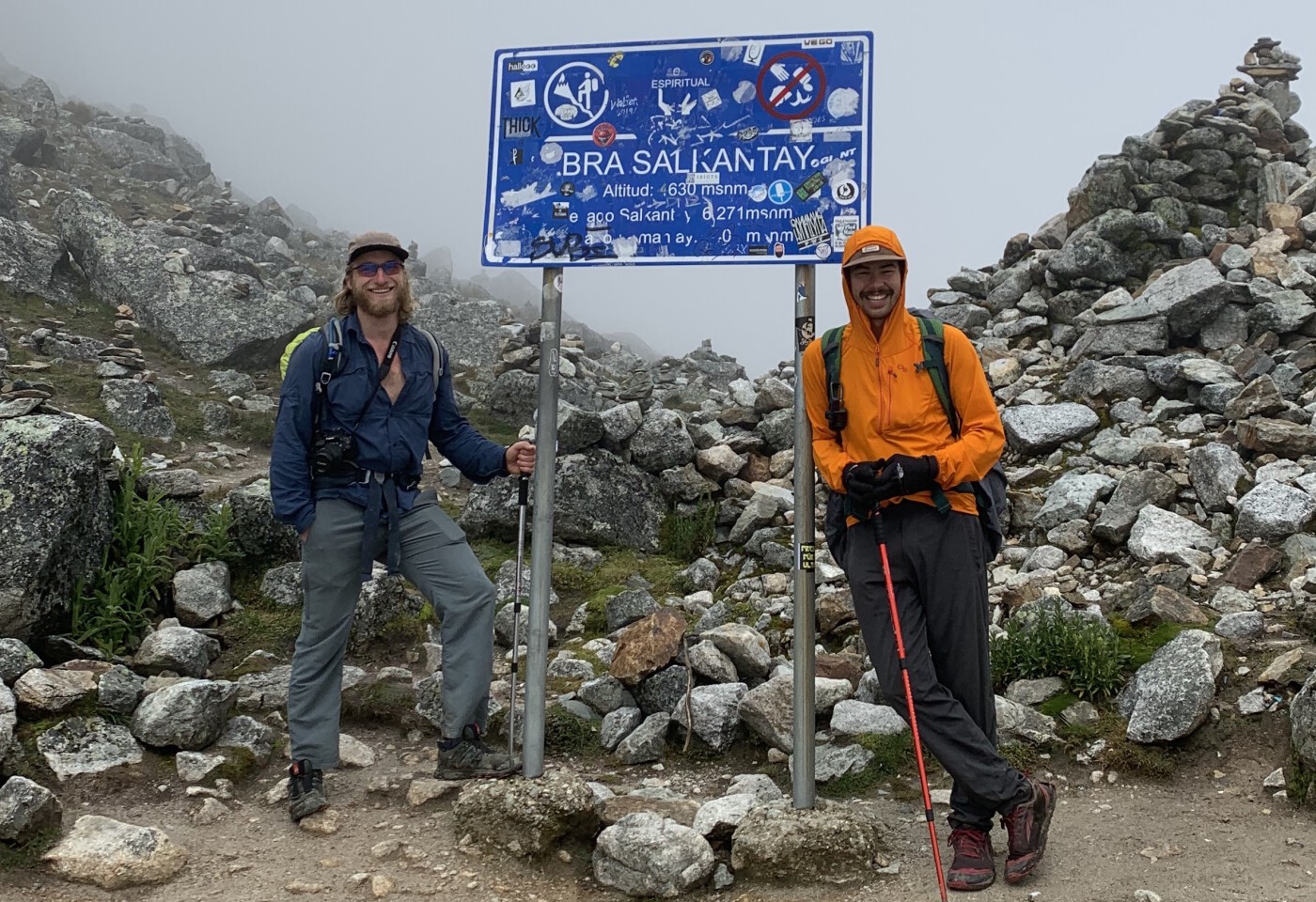 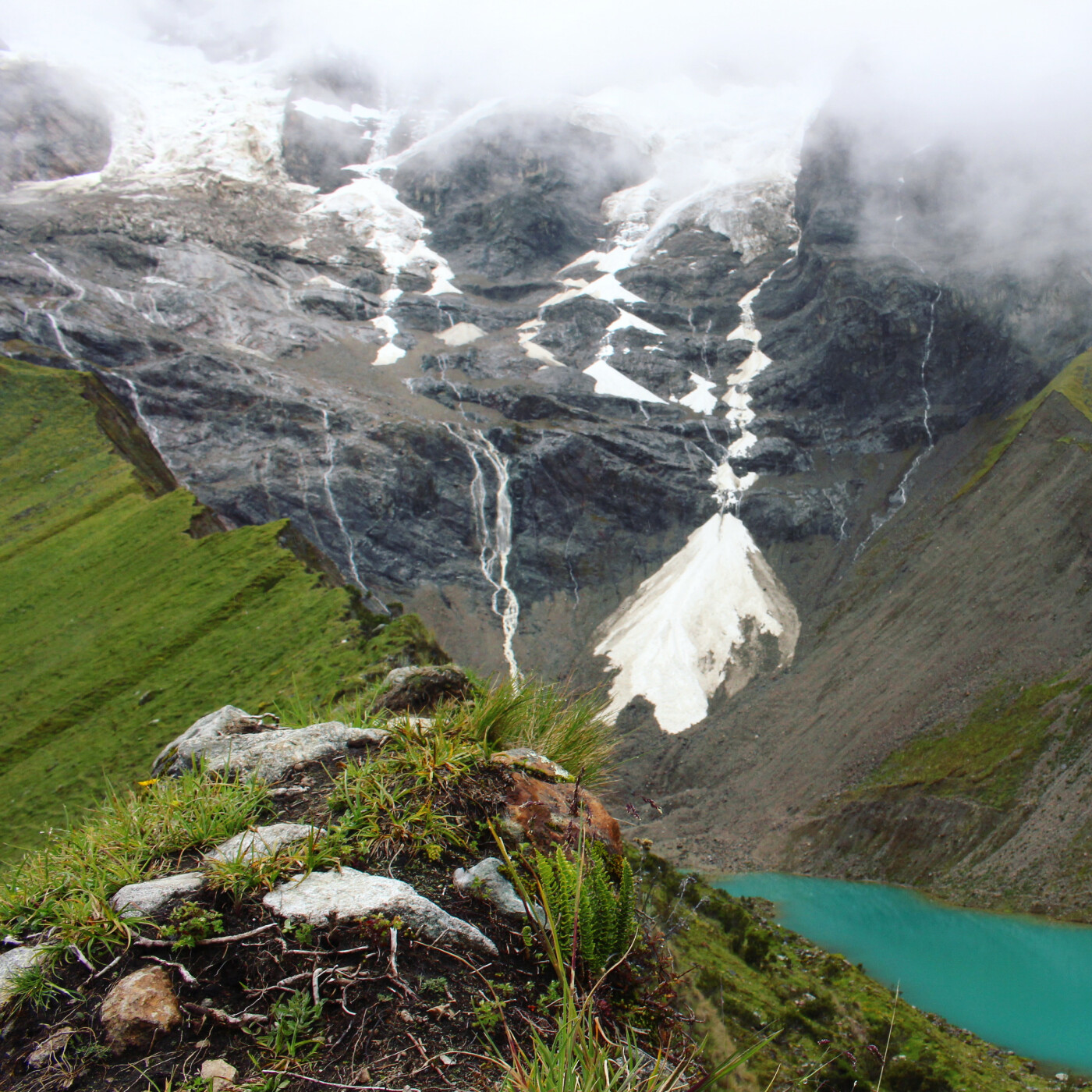 The beginning of our trek was jubilant: traversing a ridgeline above turquoise blue lakes, playing hide-and-seek with local kiddos, and sleeping under an abandoned rock shelter. Thin air made for a slow, arduous ascent, but on the second morning we triumphantly reached Salkantay Pass at 15,200 ft.

As we descended the other side, clouds congregated to create a cold autumn rain. I was happily bopping along, when suddenly I rolled an ankle. Blood rushed to my lower extremity. Likely augmented by the high elevation, I became light-headed and passed out—coincidentally smacking my head on a rock as I fell. My body lie unconscious, crumpled in the mud, as I began to choke on my own vomit. 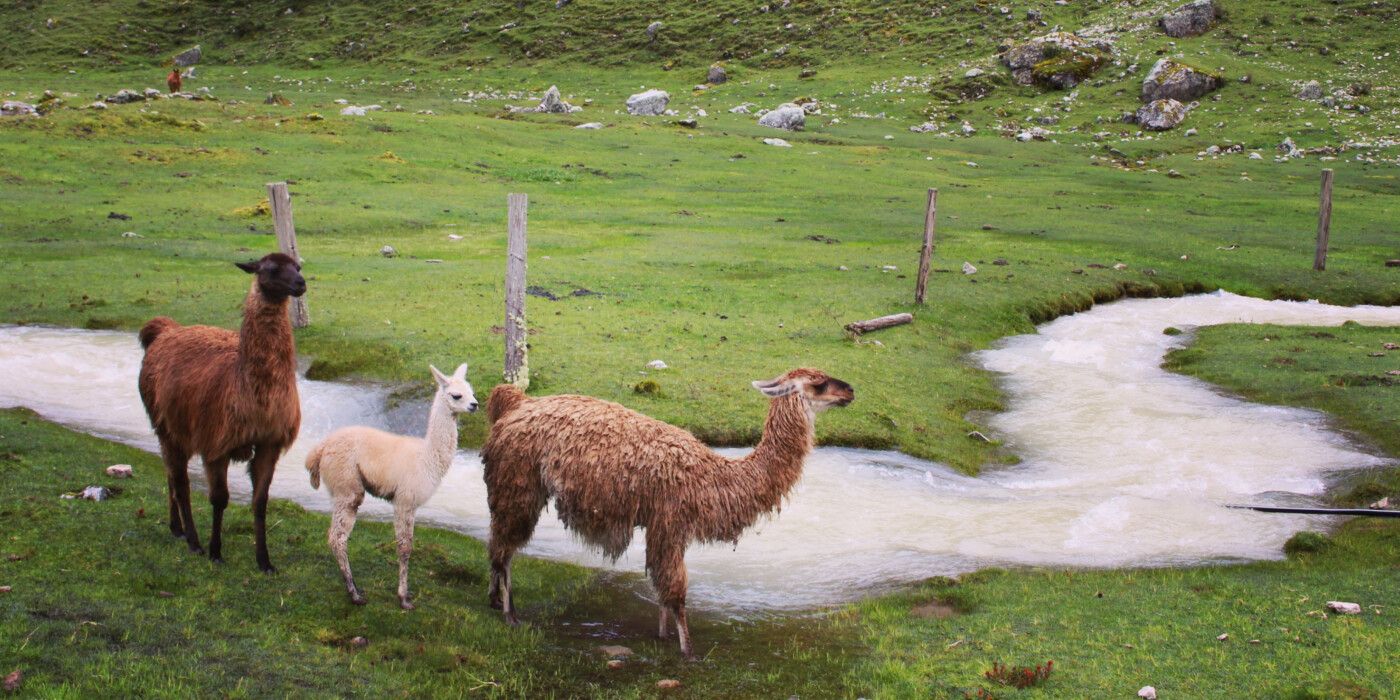 What transpired next is difficult to describe. They say your life flashes before your eyes, yet I didn’t realize the intensity of such an experience.

Every person and every place appeared sequentially in fierce flashes. But not just the past—there were future memories, too: places of personal significance I hadn’t yet visited, people I knew deeply but hadn’t yet met. An overwhelming sense of love and connection was felt for both past and future, with never a hint of anxiety or animosity. It was unequivocally beautiful. Everything appeared so quickly, yet each moment carried a depth and presence which seemed timeless.

Meanwhile my ego—the sense that I, Dave Van Veen, was experiencing each moment—evaporated. Indeed, “I” became the flow of experience itself, a kind of collective consciousness beyond form. It felt transcendent: something I’m part of now and always, something that would be preposterous to consider limited by one human life. This provided a profound sense of peace. And in that infinite moment, I was ready to go. 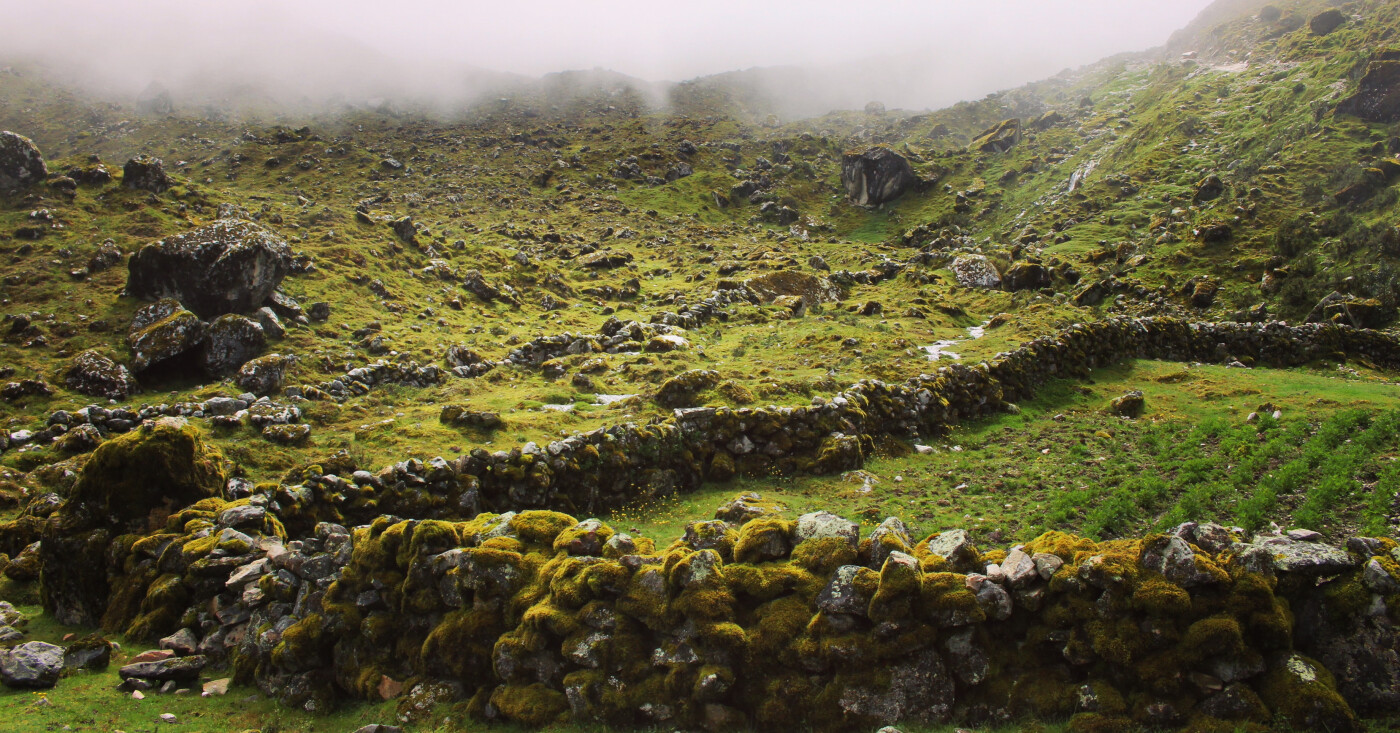 “Breathe, Dave. Easy.” Yaak held open my airway, and I gasped back to earth. Looking down at the vomit on my poncho, I felt utterly confused. What was I doing here, in this body? I’d left so long ago; I’d lived multitudes! In reality—or should I say, in this plane of existence—it’d been a mere 60 seconds.

Boy, did I have the right trekking partner; Yaak adeptly navigated the survival situtation. He found shelter, compassionately checking in to keep me oriented. He cooked a warm meal. He put all our warm clothes on my hypothermic body, despite shivering himself. After an hour of rest, we began descending to lower elevation, and I soon felt like myself again. The next day we arrived at Machu Picchu, hucking it 16 hours through pouring rain just because we could. It was epic. 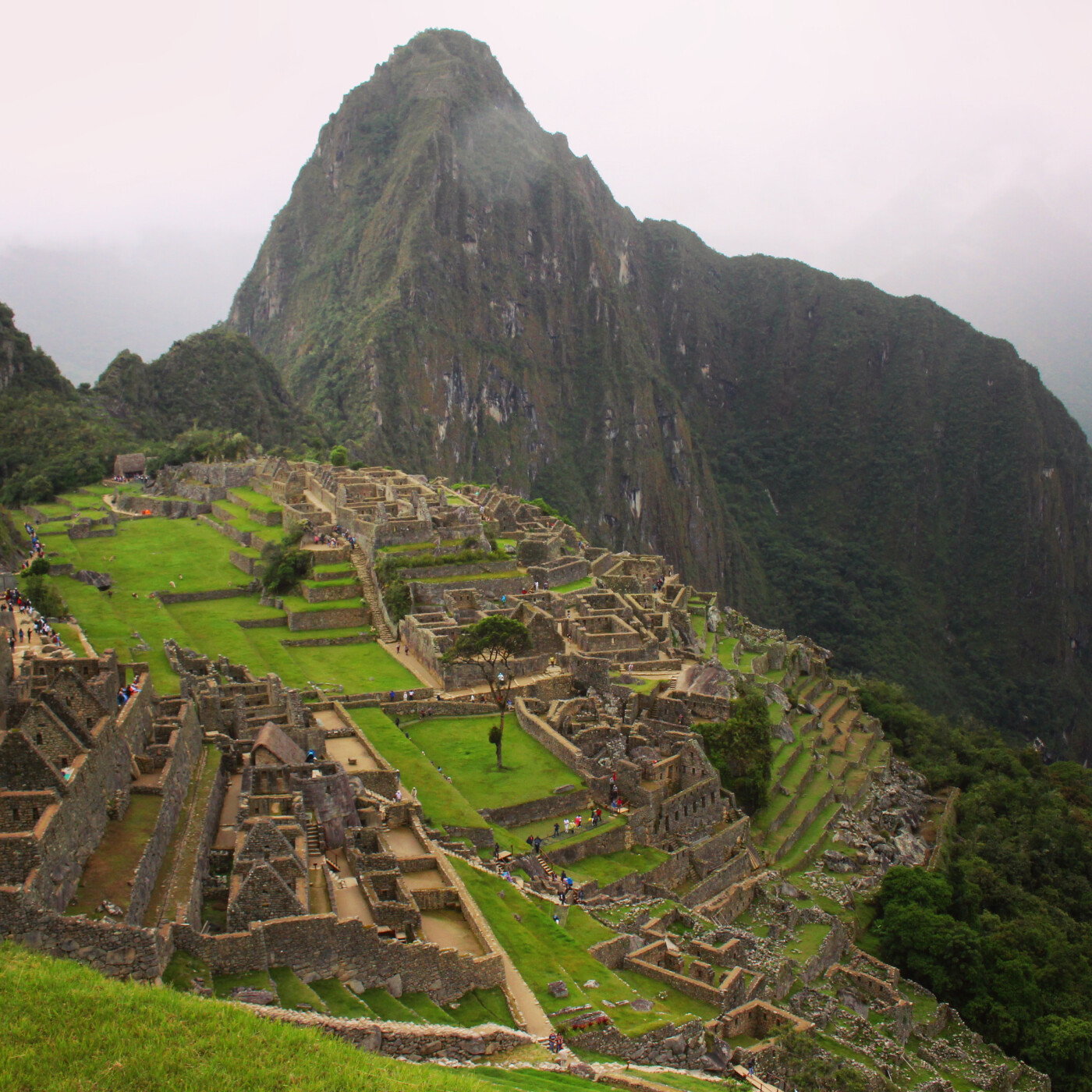 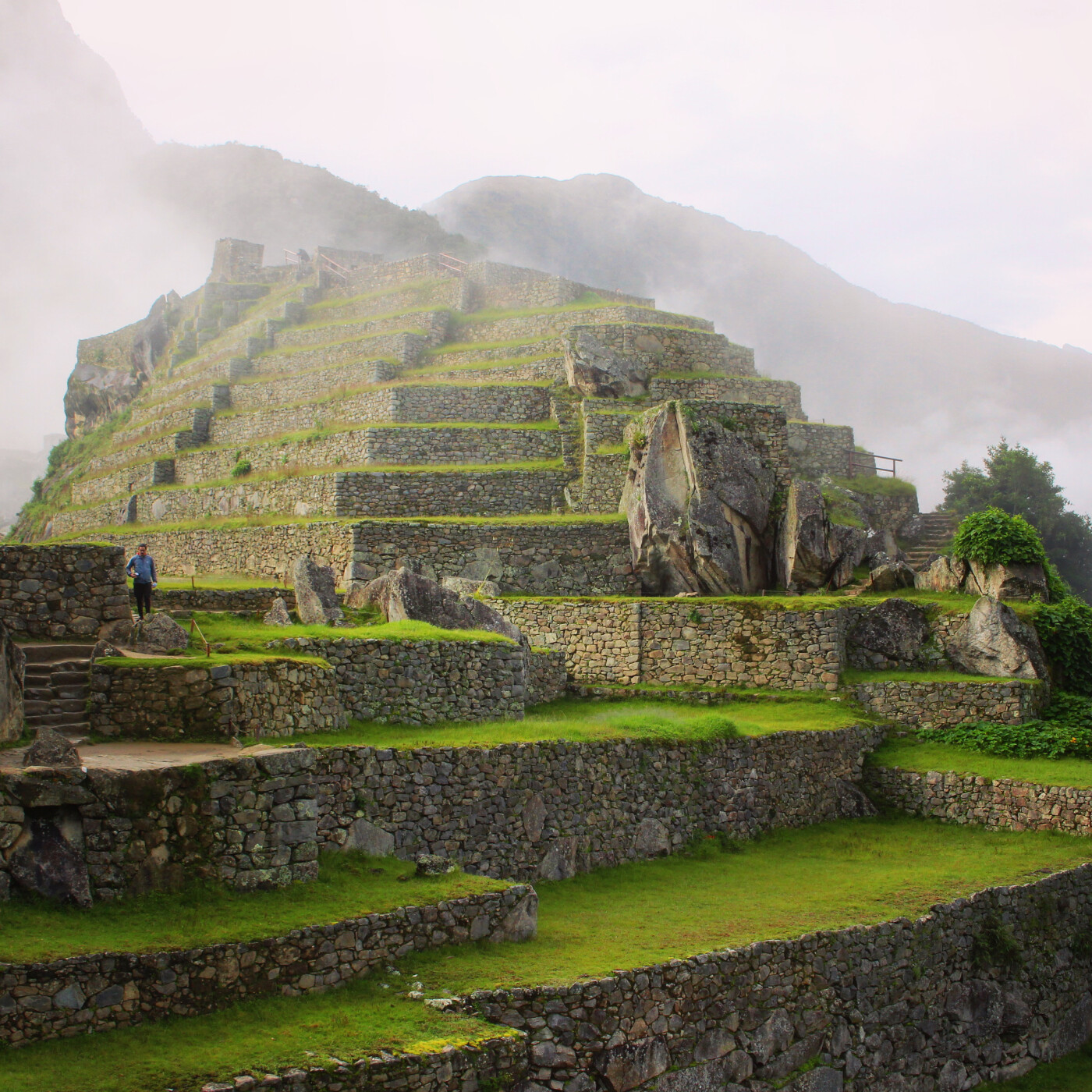 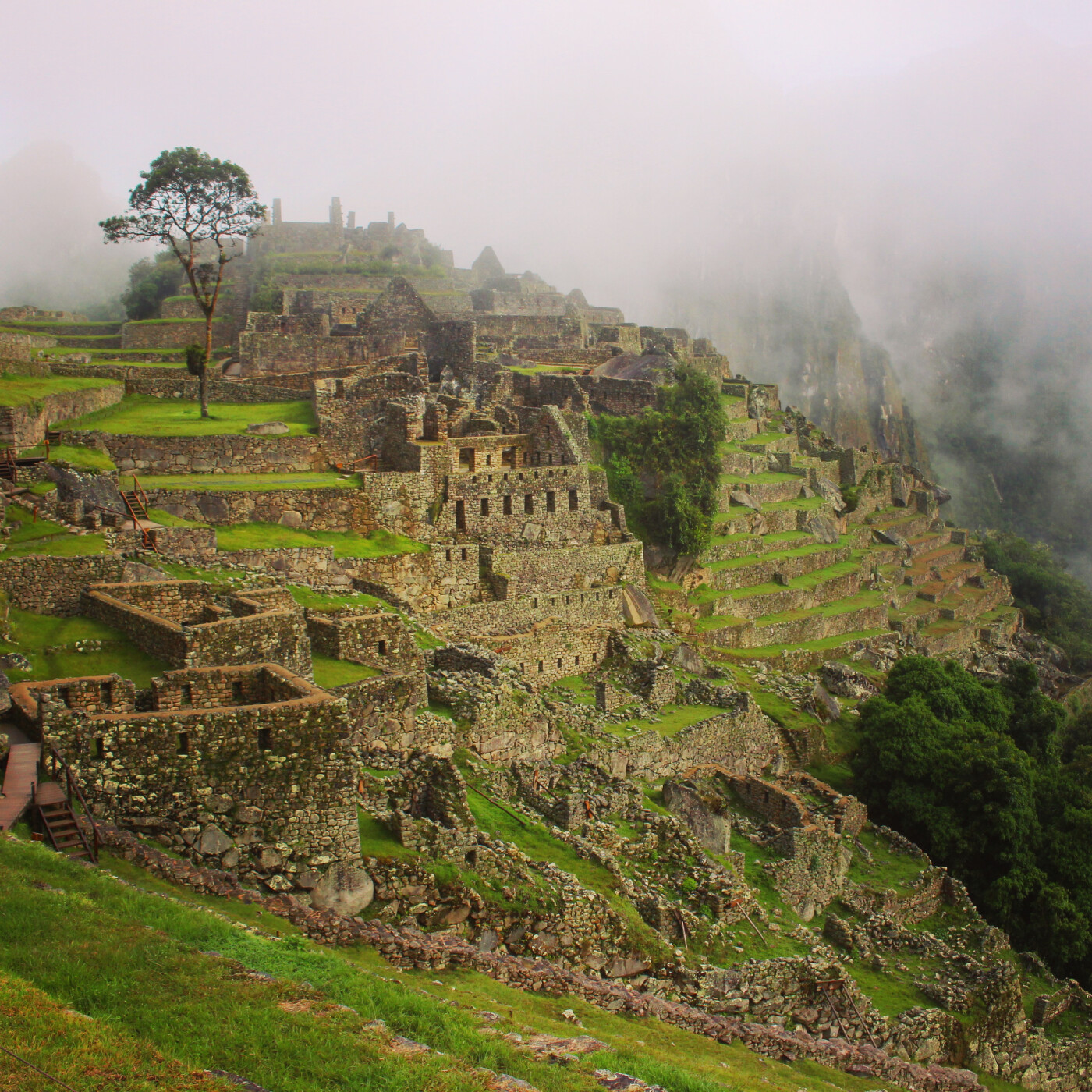 Haiku: "Mystical mountains || Ancient civilization || Enshrined in wonder."
Machu Picchu is so tucked away that Spanish conquistadors never found it. After the Incan Empire fell, MP inhabitants lived on peacefully for a hundred years; then everyone died of plague. The city lay dormant until its re-discovery in 1911.

What’s the lesson here? Well, my experience was so profoundly discontinuous with ordinary consciousness, that it’s tough to make any substantive claims about (this) reality. And if there is an “afterlife,” it’s certainly beyond comprehension of this egoically-rooted existence contained by a meat suit, which I refer to as Dave. So I won’t pretend to understand.

This has brought urgency to my life, though—not urgency to do things, in the traditional sense of “carpe diem” or crossing items off a bucket list—but instead an urgency to be: to realize the quality of mind that is at peace with reality.

Almost dying shattered the illusion that any of my achievements are cosmically relevant. What matters are moments of presence with my surroundings, with people, and with myself. In a society that places such emphasis on doing, this realization has been intrinsically freeing. It alleviates the pressure and allows me to take myself less seriously.

I wonder if maturity entails the ability to toggle between these states of “doing” and “being,” or perhaps inhabit both simultaneously. For me, this will always be a work in progress, as I intend to connect with a deep sense of awe in seemingly ordinary moments.

And when my time does come, well—I can’t say I’ll be afraid. 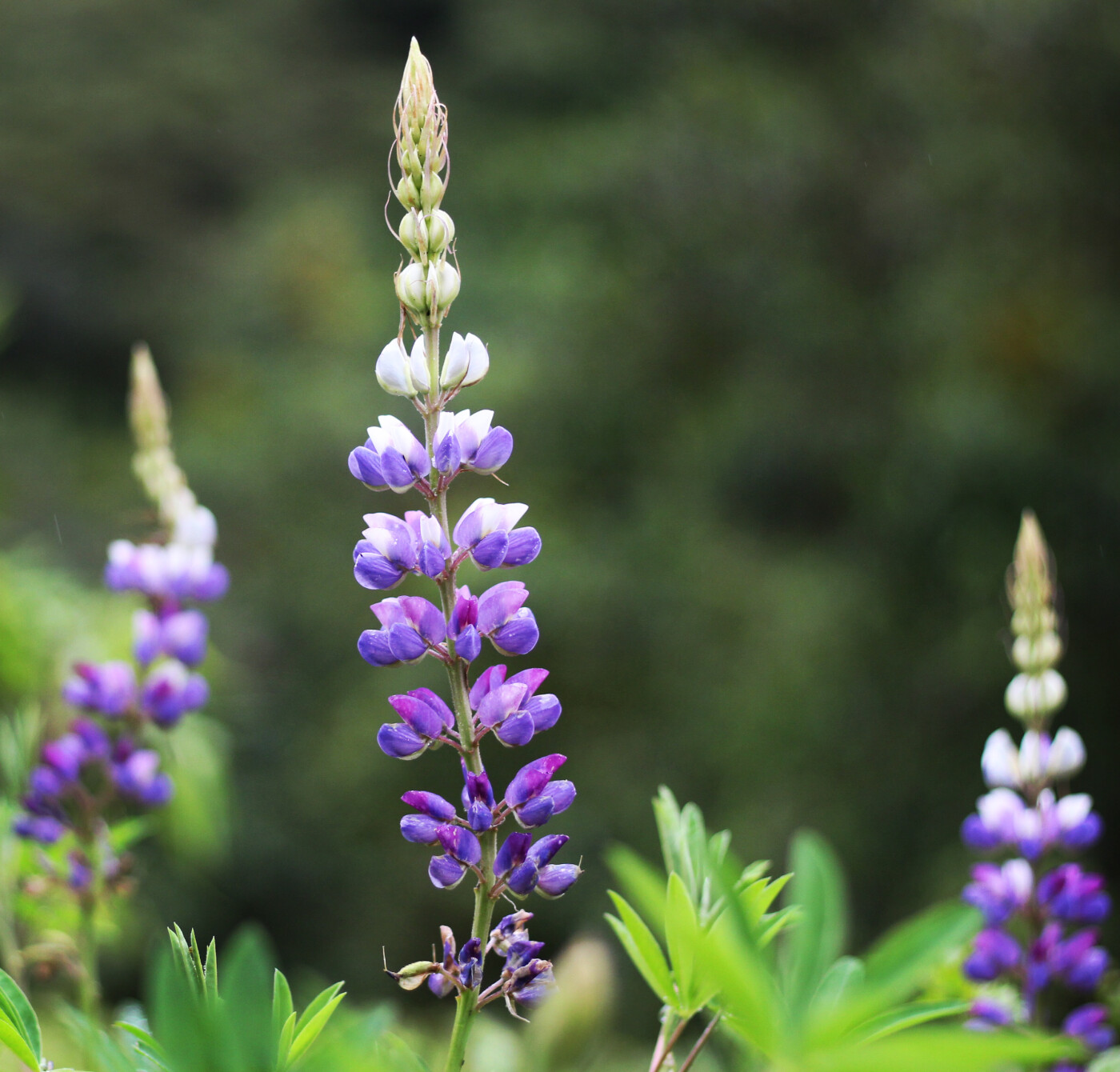 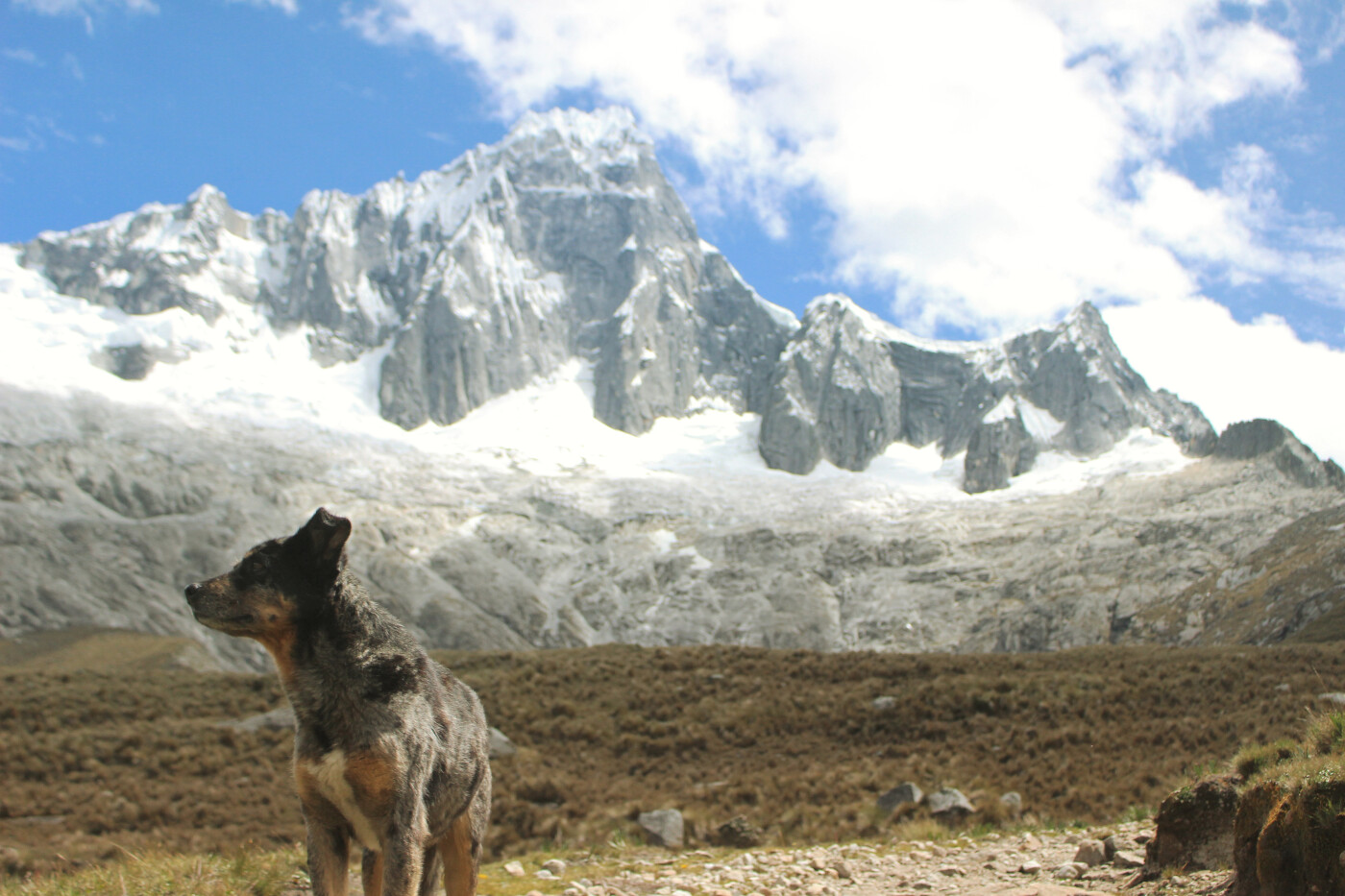 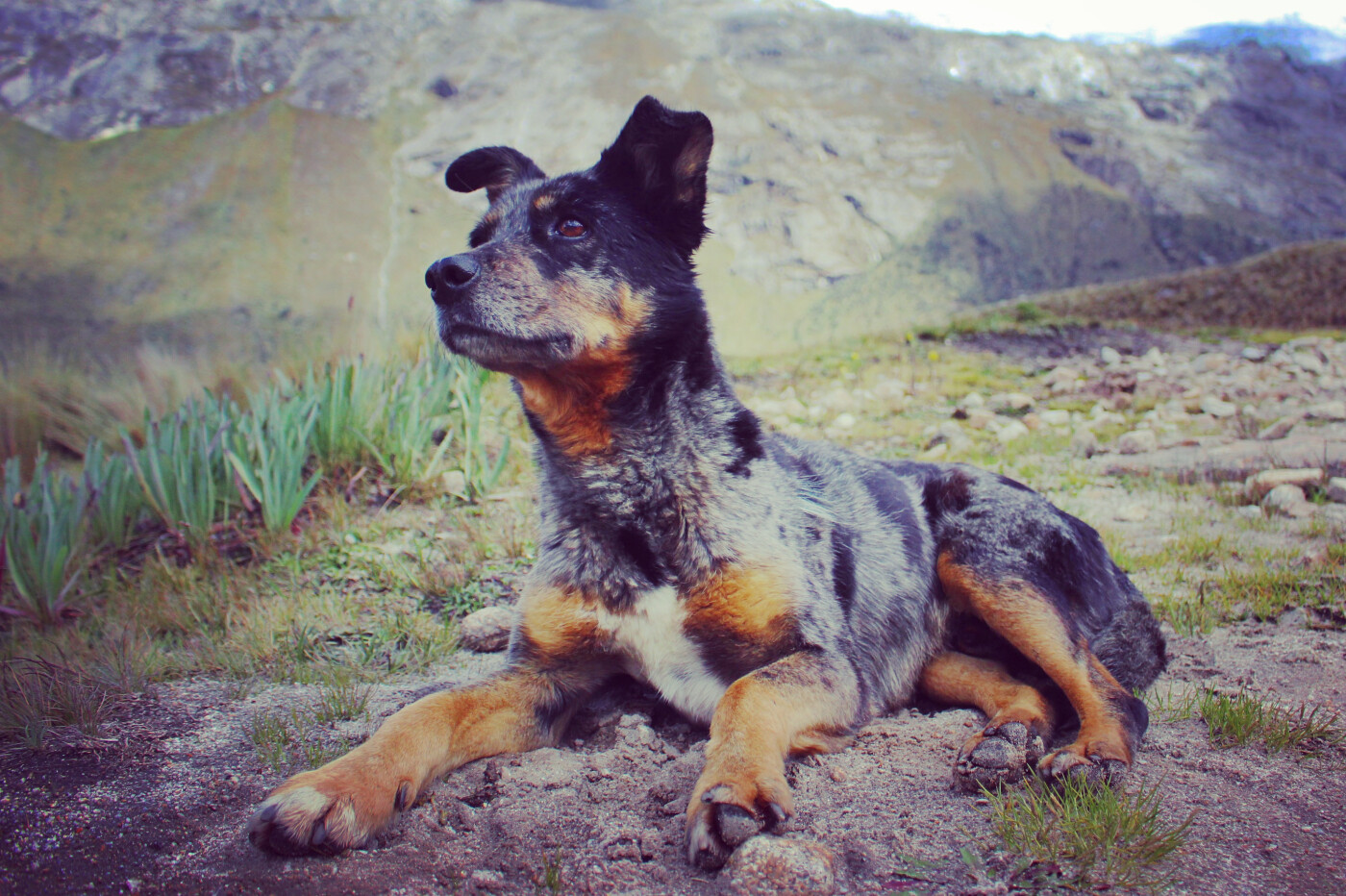 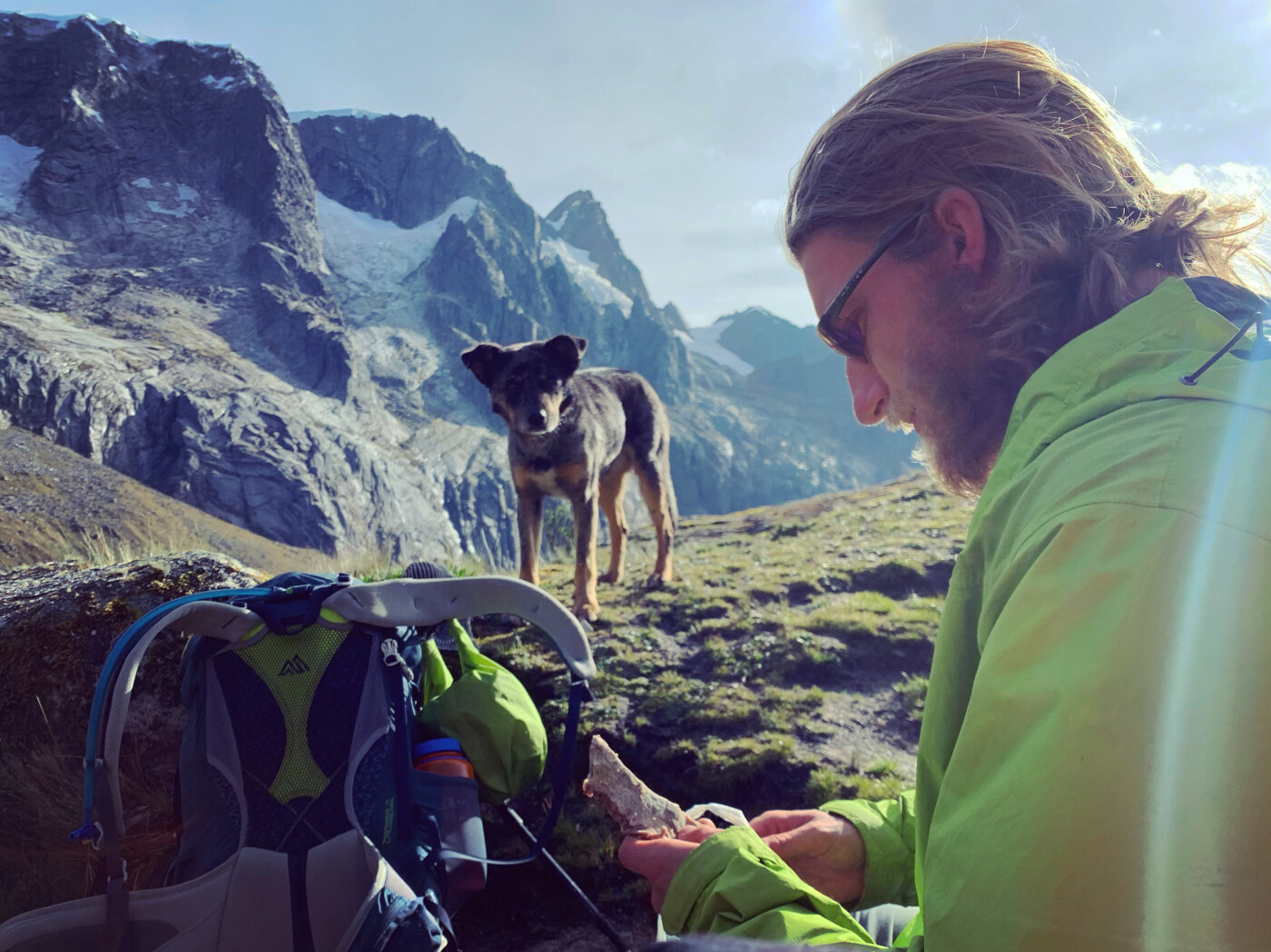 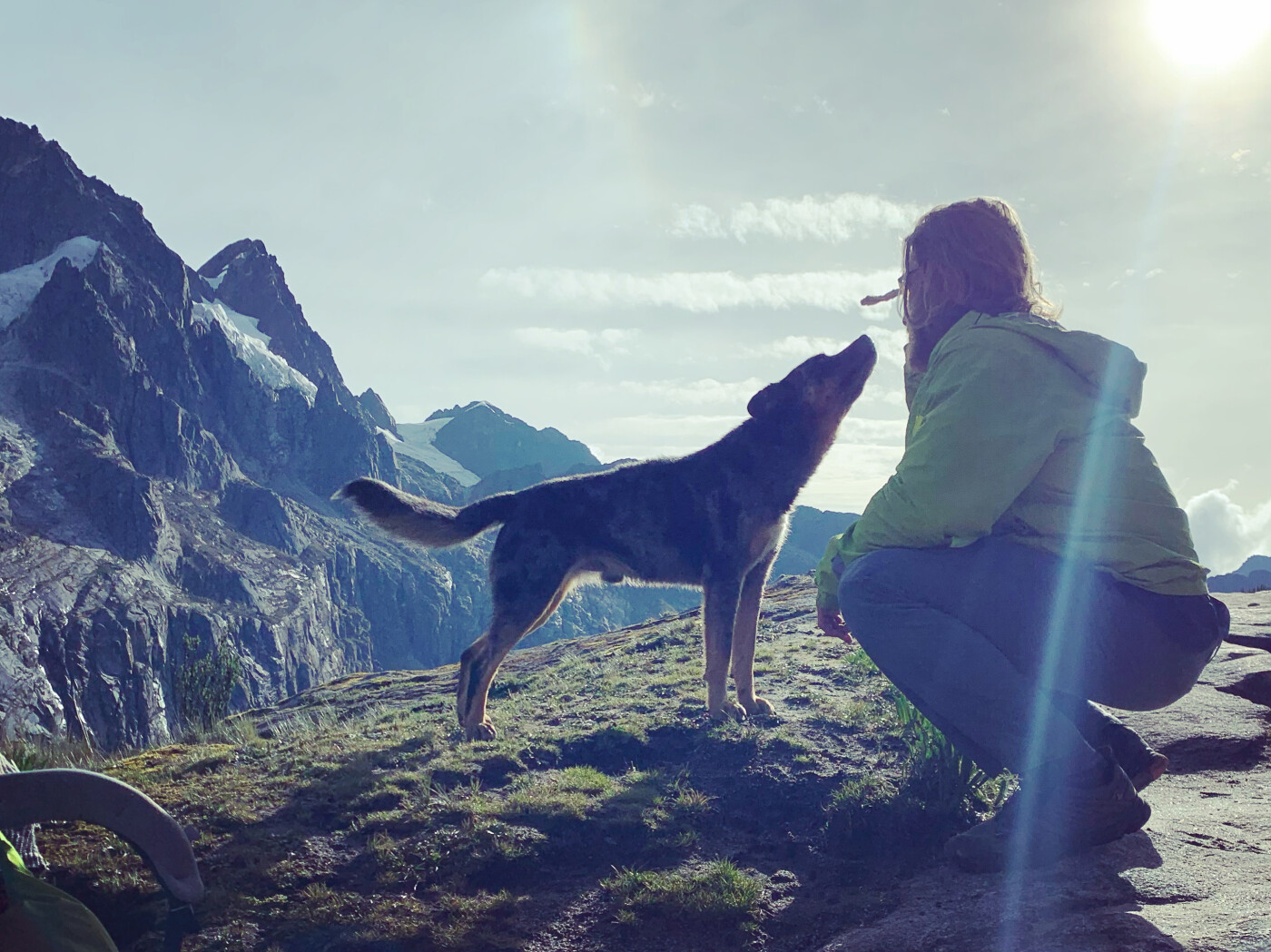 Met this Peruvian pup, and we named him Paab. A scavenger by trade, Paab was kind enough to take excess weight from our packs. He became a companion throughout the trek, even helping to find trail in the dark. Doggo certainly earned his keep! Saying goodbye to Paab was tougher for me than bidding farewell to most people. The bond between human and dog sure is a beautiful thing (credit, bottom row: Yaak).